"Matter is spirit moving slowly enough to be seen"

My paintings are imaginative explorations developed through intuitive responses to seemingly random marks and lines. They have associative links to the natural world and the endlessly facinating forms and structures experienced in nature.

Natures wilder places speak to me; they are places that fire imagination, where deep contemplation through visual and haptic sensations in the body can induce a psychological state of self loss - what philosopher and ethnographer Levy-Bruhl called ‘Participation Mystique’.

I am fascinated by how liminal states of attention and awareness — states on the border between consciousness and unconsciousness — can open up a whole new visual territory, one that effectively re-instates the primacy of imagination.

Through this process I am attempting to form a bridge between consciousness and unconsciousness, meticulously structuring intuitive responses to random marks, lines and colours. Fundamental to this work is a commitment to the revealing power of imagination where one can transcend the illusion of appearances and access the trans-personal, archetypal foundations underpinning all phenomena.

We journey inwards with painting, feeling and thinking appear undifferentiated, the places we enter reveal themselves as potent imagined spaces, echoing our lived experience whilst hovering on that strange threshold between waking and dreaming. Eye and mind delight in this freedom, the freedom to explore new forms and structures as if for the first time, with each moment of their creation expressing something of the close bond we all have as sentient beings within an animated universe.

To that end my paintings can be read as a form of psychic mapping; tracings of a mind-scape unfettered by the need to represent (re-present) by being concerned only with intuitive responses to line, shape and form as each image unfolds. Nothing is pre-planned, the starting point is empty mind and empty canvas, inchoate images then begin to emerge from the network of random marks and visual accretions, with the working process determining the outcome.

What unfolds becomes a revelation of intense visual absorption in the moment, like finding one’s way through a landscape without map or compass to measure or determine progress. Through the experience of loss we find meaning and coming home becomes a point of arrival determined by successive departures from the known.

One’s relationship to the world, what is of value and significant, presses forward into consciousness or else remains (temporarily) unconscious and yet also significant – being determined by the particular intensity of a given experience. Such intensity of experience can shape one’s life for better or for worse, be profoundly transformative and uplifting or depressingly stultifying.

By navigating through such inner landscapes using the tools and materials of the artist, one can, in effect, re-imagine what it might mean to be truly human in a world that appears to be increasingly shutting down our innate sensibility towards this living planet we call home. 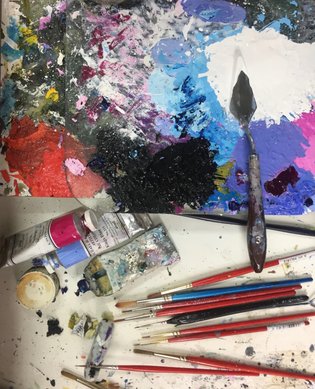 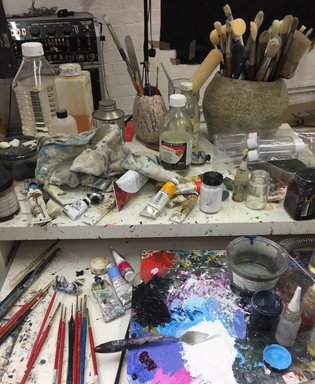